← The Demon Motif in Kukishin Ryu: Part II of II
Thoughts on Kaname →

I’d like to start this blog by thanking the readers who have expressed their appreciation for the posts I’ve made thus far. Thank you for your feedback and letting me know that you’ve found what I’ve written to be helpful to you. My intention was to make one entry per month, but last summer became very busy, and that continued right through the end of the year, so that whenever I would prepare to write an article, I’d think to myself, “Is this really the most productive thing that I could be doing right now?” The answer most often was, “No.” And so the blog went quiet for a few months – but in the meantime, I’ve kept an active list of interesting topics that I want to write about, so these will gradually be coming out in the next little while. 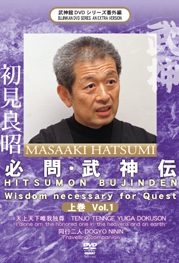 What I wanted to write about today is the latest DVD set from Hatsumi Sensei. Last summer, I received a handout at Hombu Dojo that asked Bujinkan instructors in Japan to speak with their students and see what questions they would like to ask Hatsumi Sensei. The questions could be about anything – directly related to training or not – and we were told that Sensei would discuss the questions received on a DVD. This DVD set (2 DVDs, 2 hours each) was released for sale at Daikomyosai 2011, and is entitled, “Hitsumon Bujinden (必問・武神伝): Wisdom Necessary for Quest.”

In evaluating this 2-volume set, my opinion is that although the production quality is lacking in some aspects, the content more than makes up for it.

In speaking of production quality, I’m referring to the spacing and punctuation of the English text on the DVD case, as well as in the subtitles in places. Simple things like having a space after a period can make a big difference when it comes to the impression of the quality of the product. The quality of the translation is also not 100% in some places. The production company was on a tight timeline to have the product ready for sale at Daikomyosai, but were behind schedule, so the Japanese text (transcribed from the video by a Japanese native) was sent to the translator later than originally planned, and the video content was not sent to the translator until the day after the translation was supposed to have been completed. When the translator checked his translation of the text against the video, he realized that the Japanese transcriber had made a number of mistakes and omissions, leaving out things that Hatsumi Sensei had said, misunderstanding things Sensei had said, and using incorrect kanji characters for words that sound the same (for example, using the kanji for Banpei (番兵, sentry), when what Sensei actually says on the video is Banpen Fugyo (万変不驚)). The translator made recommendations for changes in these cases, but not all of these were implemented by the production company, ostensibly because they were too strapped for time in regard to their target release date. The result is that the English subtitles appear a bit disjointed in places (and in a couple of places even include numbers, where the video editors mistakenly copied in parts of the time-stamp code from the original video).

All that being said, the content of what Sensei talks about in these DVDs makes them well worth having. Sensei discusses many things related to training, as well as many teachings and philosophical ideas. Some things he talks about he hasn’t spoken openly of before, to my knowledge, like details of his family background and upbringing, which was not always smooth. It struck me how well he processed his own background, and how he turned it all into positive, into good. Sensei refers to this as using bad experiences as fertilizer with which to foster a positive life. It occurred to me how essential this processing of negative experiences in our lives helps us grow spiritually. Aside from any considerations of enlightenment, perhaps it is the degree to which we process negative life experience and turn it into good that is an indicator of spiritual advancement. Sensei seems to have answered the big questions of his own life. Each of us have our own questions that need to be answered as well.

Although Sensei is in interview mode, the DVDs don’t just show him speaking – there are still shots and video footage of his early life, training with Takamatsu Sensei, and his work as an advisor for film and TV programmes, in addition to scenes from training seminars, Taikai, and Hombu Dojo down through the years. I feel that the photos and video give a wonderful overview of Hatsumi Sensei’s martial arts career, and that what he talks about in the interviews provides valuable teaching and advice for life – both for training in the Dojo and in living daily life.

This is one of my favourite DVDs with Sensei to date – highly recommended.

← The Demon Motif in Kukishin Ryu: Part II of II
Thoughts on Kaname →