Path to the Heart of the Flower (IV)

In the last blog article I wrote on my early adventures in Japan, I related how I went to Iga in search of Hatsumi Sensei in October 1990, but didn’t manage to find him.

After not having found him, there was nothing else to do but return to Hiroshima and continue with my English teaching schedule. I also went back to my Karate studies, and continued pounding my fists into bloody hamburger against trees.

END_OF_DOCUMENT_TOKEN_TO_BE_REPLACED

Path to the Heart of the Flower (III)

In Part I and II of this adventure, I wrote about how I made my way to Japan in 1990 to teach English, pursue Karate training, and look for ninja grandmaster Masaaki Hatsumi. I had arrived in Japan in early August, and now, finally, in October, after getting settled into my apartment, teaching schedule, and Karate training, it was time to set off in search of the ninja master.

Getting information about ninja masters wasn’t as easy in 1990 as it is today. There was no Internet, at least not as we know it now. I remember writing letters home that would take a week to ten days to get from Japan to Canada, and a ten-minute phone conversation to connect with family cost me $100. The only information I had to base my search on was contained in two books on the ninja that I had brought with me to Japan. Both of these books were authored by the same American student of the grandmaster, and both of them pointed to the Iga region as the home of the ninja clans. Eager to meet Hatsumi Sensei for myself, I made plans to visit the area, the city of Iga–Ueno, located in present-day Mie Prefecture.

END_OF_DOCUMENT_TOKEN_TO_BE_REPLACED

Path to the Heart of the Flower (II)

In Part I of this article, I wrote about how I became involved in Japanese martial arts and the reasons for my growing interest in all things Japanese. I arrived in Japan in August 1990, the 45th anniversary of the dropping of the atomic bomb on Hiroshima. My 1st month in Hiroshima was a time of adjustment – and many social faux pas (which continue to this day!).  In time, I took over the majority of English classes offered by the small English school where I was working, which was run by an American Christian missionary and his family. In fact, I myself had come to Japan on a “religious activities” visa, sponsored by an American missionary organization and the small country Baptist church in which I spent most of my youth. The church had a history of almost 200 years–and I was its 1st ordained missionary. 🙂

END_OF_DOCUMENT_TOKEN_TO_BE_REPLACED

Path to the Heart of the Flower (I)

February 9th was the 20th anniversary of my first day of training in the Bujinkan. I mentioned it on Facebook, but was encouraged to write a series of blog articles about a bit of my martial arts history and how I found the Bujinkan and made my way to Japan to train with Hatsumi Sensei – to approach the heart of the flower that is Japanese martial arts, budo. I’ve always found it fascinating to hear stories of the adventures of my Sempai here (Mark Lithgow, Michael Pearce, Mark O’Brien, Andrew Young, and Mike L) and, now in my 17th year in Japan myself, I thought it would be fun to look back over the years, and in remembering, share some of that with the readers of my blog.

END_OF_DOCUMENT_TOKEN_TO_BE_REPLACED

One Year After the Quake

Exactly one year ago, the ground underneath my apartment in Abiko began to shake.

I was downstairs in my guest apartment doing some work when the trembling began. I stopped, as I often do when tremors occur, to see if it would get big enough for alarm. Most of the rumbles we get are small enough so that nothing falls over, and in a few seconds it’s back to life as normal. But this one was different. In 15 years of life in Japan at that point, I had experienced only one quake that had made anything fall off shelves. As I sat, paused and alert, in front of my laptop, the quake strengthened – and then, first one, and then one after another, things started to fall off of shelves – and then out of cupboards…
END_OF_DOCUMENT_TOKEN_TO_BE_REPLACED

Back to Middle School

I shouldn’t say “Back”. I’ve never been to middle school. It used to be elementary, then junior high, then high school in Canada, but in the time that I’ve lived in Japan, things in Canada have changed. Now they have elementary right from kindergarten, and then Middle School is from Grade 5-8 and high school is from Grade 9-12. At least that’s what I think they changed it to – I can’t keep track. 🙂

Anyway, I’ve been back in Canada for week visiting family, and today I was invited to give a talk to my niece’s class about the March 11 Great East Japan Earthquake. During the 45-minute session I talked about the Ring of Fire, Japan’s history of earthquakes, and some of the details of March 11th, including the tsunami and the nuclear problems it caused. This was followed by a Q&A, with students asking some good questions – one about HAARP, which I couldn’t really answer. Good food for thought though! The teacher wrapped up with some images/video from the quake that she’d taken from news sources. The class really seemed to connect with what had happened and to be experiencing as sense of empathy with the Japanese kids of their own age who had lost family members along with all of their worldly possessions.

It was only a short talk, and probably many of the kids were just happy to have someone in to talk so that they didn’t have to do any class work. But seeds have been sown, and hopefully this will trigger some thought processes about world events, and maybe even inspire some future philanthropists or aid workers. 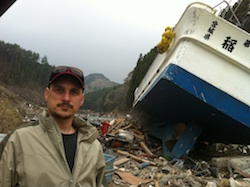 Last week I heard that my friend Doug Wilson was planning a trip with a friend to the earthquake/disaster zone to deliver relief supplies and volunteer for work in the area. I called him to see if there was anything that I could do, and was invited to go with them. I got on the phone to friends and collected money and supplies from people that I knew. Yesterday (27 April) we rented a van and drove up to one of the worst-affected areas, the city of Ishinomaki, Miyagi Prefecture. Along the way we stopped to get more food and supplies that were on a to-buy list that we received from the NGO, Peace Boat.

The drive took about 4 hours, and on the way we had to pass through the 30-kilometer “stay-indoor” zone set up by the Japanese government. At this point noone is allowed entry into the 20-kilometer “no-go” zone around the damaged Fukushima nuclear power station, but between 20-km and 30-km evacuation is still optional, although the government does advise staying indoors. We passed through this zone and headed farther North, to the coast. Along the way we began to see cars and rubble that had been left in rice fields by the tsunami when it retreated. That was nothing to compare to what we saw when we finally got to the coastal area around Ishinomaki.